“Something has spoken to me in the night … and told me that I shall die, I know not where. Saying: “[Death is] to lose the earth you know for greater knowing; to lose the life you have, for greater life; to leave the friends you loved, for greater loving; to find a land more kind than home, more large than earth.”

Tours are galleries for dead ideals. But if you go on one and happen to be paying attention, perhaps you might learn something. For me Thomas Wolfe was just a name on the literary canon before today. A name attached to a tagline. But a guided walk through his childhood home fleshed out more than expected.

Since it was past check out time and temperatures were in the mid 90’s my dog, Duke, had to come along.  Thank goodness the tour guide offered or I would’ve had to pass on it. She reassured me it was no problem, considering there was one other person coming on the tour. Lovely I thought, it will be more personal.

The man joining us was a rather bookish fellow with a naturally occurring tire settled around his periphery. He seemed uninterested with what’s going on around him. We were guided through the foyer and into the kitchen where we were shown various articles from the young writer’s daily life. The man bookended the guide’s statements and seemed to crossreference them out loud. Duke was pleasant and followed along effortlessly. We proceeded into the living room. The gentleman sounded off more of his encyclopedic assertions, which made me begin to wonder. 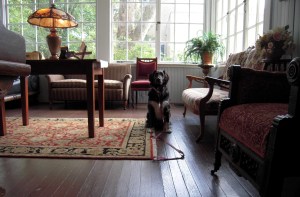 In the presentation we learn that Wolfe wrote about himself and his hometown, Asheville, NC. His protagonist, written after himself, was a marked man who is somehow different from the rest of society. He wished to record everything that happened to him. The man here again piggybacked with his own historical details, on the writer’s itinerary right up to the publication of Look Homeward, Angel. As we moved along, we learn of the stir the book had caused when he came back to town.

I remembered my first visit to my childhood home and how small everything appeared. The walk to my old street seemed so short in distance and girth. I felt like a giant coming eye to eye with a house that used to harrow over the entire village.

You Can’t Go Home Again. What a tragic title for a book, I thought, as Duke and I followed our guide in step with Wolfe’s shoes, I imagined his minuteness against the household’s landscape. All matter is important. The furniture, the size of the bedroom window, the bed a few inches below are very significant. It was nice to listen to the writer’s story as it was parlayed formally and bits of his personal life fell off. As it turns out the man who wrote the book You Can’t Go Home Again came home quite often. Even at the pinnacle of success he returned from overseas and places like New York.

As with many writers, he was a loner. He was different. Wolfe’s furious rants, dealing with the banality of other people’s indifference made him an introvert. His mother was quite contrary. The house bustled with events, parties and guests. So much that she often put little Thomas out of his room in order to host strangers. A leather suitcase lays silently on his bed.

I felt I was getting warmer toward what it must’ve been like for Thomas Wolfe while was alive. His plight, the pain of seeking something which can never be restored.

The conversation over yonder, however, had taken a different turn. The living breathing encyclopedia had Wolfe in a coffin already. His cold body being transported over on a train somewhere.  Then somewhere else, and whathhaveyou, with controversy and much ballyhoo later, the body made it –as he put it – “back home where it rightly belonged.”

I wonder how Thomas Wolfe felt about that. I thought of the destructive effects people we know have on the outcomes of our life. The relationship between writer and reader. How little control a writer has over the material once it’s out there. The fans, or in this case the super-fan whose imagination could only take him so far. Wolfe was born in 1900 when book themes such as the “cult of genius” were alive and well. Still. How the human spirit puts all its might toward an idea. Struggle a lifetime with that idea. Only to be undone by the people who survive you. Tragic still.

Wolfe’s personal, subjective writing went pages for pages unencumbered. Was this his return for such an egocentric and inchoate style?

What occurred to me right then was what I’d heard many writers who’d enjoyed a certain level of success say. Conscious of themselves and to their vested interests: Time to get out of the way; let others have their say.