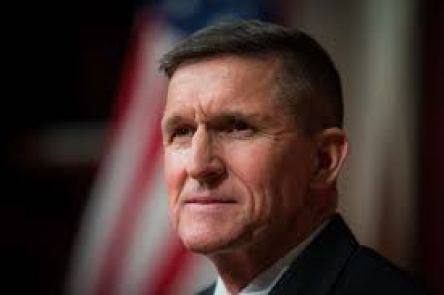 A game of Russian roulette played on general Michael Flynn forced him to pull the trigger on his new role in the Trump administration on Monday, February 13, 2017.  The next day, Wikileaks puts out a tweet, “National security adviser resigns after destabilization champaign by US spies, Democrats, press.”

It was a Washington Post story that threw the first shot at Flynn’s discussions with Sergey Kislyak, the Russian ambassador to the U.S. These discussions, which allegedly went over Trump’s head before he was sworn to office, were about lifting the Russian sanctions placed by the Obama administration on December 29, 2016. The sanctions included several Russian intelligence agencies some with questionable allegiances such as, Special Technology Center, based in St.Petersburg.

As the saying goes: When you point one finger, there are three fingers pointing back at you. While a career general may have been brought to his knees, the who, the what, the why, sticks out begging questions.

What has become apparent is anybody in the national security apparatus has access to information regarding phone calls and the data sweep conducted by the National Security Agency. Data sweeps of gov’nt officials and all Americans making calls internationally. So, when Flynn makes a call to the Russian Ambassador, it gets tagged. Then all Obama would have had to do is ask one of the National Security advisors what was on that phone call. Then that information could potentially be leaked to anyone. The WaPo story is based on a transcript of the general’s calls leaked to the press by the FBI.

On Fox News, Sean Hannity brings up the question on everyone’s mind: Was Michael Flynn politically assassinated? Reading the provocative headline from a column written by political analyst, Eli Lake from Bloomberg View. He comments:

Normally intercepts of U.S. officials and citizens are some of the most tightly held government secrets. This is for good reason. Selectively disclosing details of private conversations monitored by the FBI or NSA gives the permanent state the power to destroy reputations from the cloak of anonymity. This is what police states do.

It’s the national security bureaucracy. It includes everything from the administrative side of the pentagon, elements of the career military: the CIA, the FBI…it’s the people who would have possession of these kinds of intercepts. And we trust them. It is a public trust that this stuff does not get out into the public willy nilly. Because when you kind of selectively disclose it, you can ruin someone. Because it’s an extraordinary power to be able to listen to people’s phone calls or read their emails like that.

The last time I can remember anything like this happened was in 2009. It was about Jane Harman. A lot of the press did not pick up that story. It was in CQ. But. We almost always never see this kind of thing. Because it’s not just U.S. citizens, it’s also U.S. officials. This is the kind of thing that happens in banana republics when the national police will go after a political leader that they don’t like and using these extraordinary powers.

You can’t see the names of the people on these intercepts. They are redacted.

If the MSM’s real objective is to go after the big story it’s pretty obvious what it is. There is a giant elephant in the room animated and trying real hard to get its attention. Gov’t officials leaking intelligence. Why then is this being ignored? Why is the media so selective when taking the high moral ground? Far from a tip, even if leaked to the media. But, what fits the media’s gotcha narrative is Michael Flynn under a microscope nitpicked over what he said and what he really meant to say to Vice President Pence about those talks. Once implicated in a rapid fire attack on words, open to blackmail by Moscow becomes the final blow. It’s all downhill from there. Big stain on a newly suited administration. It makes sense why Trump would ask Flynn to resign. But it begs the question as to why old suits in Washington wanted Flynn to go. 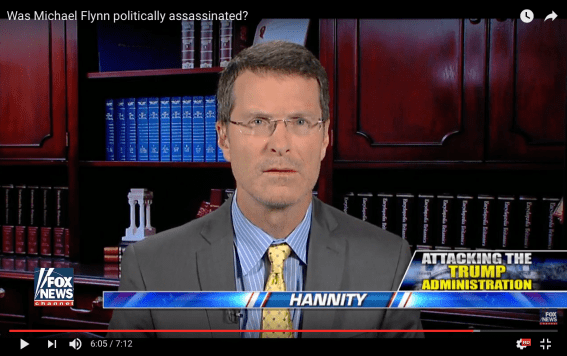 Further, Paul Sperry of the New York Post adds that it goes a lot deeper than that. He put a face on the matter by identifying Obama sabotaging Trump’s presidency:

Intel has been politicized. There’a no question about that. To delegitimize, undermine Trump, and that goes back to December.

But these other protests against Trump, also Republicans on these town hall meetings, turns out Obama and his protesters are behind these protests. They are not spontaneous.

Sean Hannity asks if the leaks had to do with Obama holdovers. Sperry replies:

Quite possibly. In the case of these marches and these other protests these are being organized by a group founded by Obama called Organizing For Action. It’s a radical Alinsky group. It’s got a lot of money. And they are training an army of agitators to sabotage Trump and his policies. While at the same time protecting Obama’s legacy, like Obamacare and the Dreamers.

What may be worthy of note in regards to the sudden attacks on Michael Flynn is that on February 1, 2017 he put Iran on notice over a missile test. The Trump administration has not been favorable of the Obama Iran deal. Obama, on the other hand, went out of his way to defend the deal before he left office in January.

Sperry finishes his thought by holding up a printed image of Obama’s new website pointing to OFA prominently linked on the front page. Though it is highly unlikely that he is acting alone, it looks like Obama is returning to the job description most notably listed on his resume: Community Organizer.