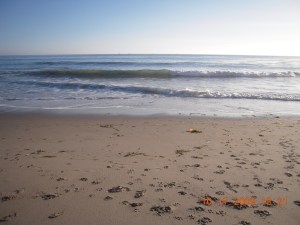 Road weary and absent minded I was filling my tank at a Malibu Chevron station. A teenager was giving me the thumbs up and with some effort she caught my attention in saying “I agree.”

Alright, I thought– whatever – failing to understand the implication.

“Your shirt,” she clarified, “I agree with what your shirt says,” as if a light bulb had gone on in her head about everything she’d seen happening around her.

I came to such agreement when I first picked it out at a local shop, selling select closeout merchandise in Wilmington, NC, of all places. Size large and one in stock the bright yellow shirt read WEIRD TIMES in pixelated black lettering.

This about wraps it up, I thought.

For someone who abstains from wearing any kind of logo, I was delighted to slip this shirt on immediately. I changed right in the shop and walked home with it on. Proudly representing the two words pressed against my chest and belly.

Still, if the shirt called any attention to itself it wasn’t my doing. I was still trying to understand and trying to keep it under wraps. It knew it summed up everything I cared to flesh out in detail. Detail I hadn’t fully uncovered yet. The shirt came to stand as a secret emblem of my looming departure.

Coast-to-coast I was, then, remiss of the shirt’s attributed meaning. It now had visible stains that wouldn’t wash out and its brightness faded with wear-and-tear. I had finally made it to the West, but the idea hadn’t settled in me.

I was walking along a new frontier and nothing was certain. No frame of reference.

Here I was in Malibu, of all places. A place I’d only known as an ideal. A place known synonymous with success. The Dream. A place where petty little grievances made by pouting teenagers may be considered obscenely benign by teens in less affluent parts of the country. Or, so I thought.

When the young gal concurred about my trademark, she brought it all back home.